Living at Lammas is a strange combination of radical change and maintaining the status quo. Really Lammas isn’t anything more that a group of people doing their own version of living in a low impact way. This means that there are as many different approaches as there are residents. And not everyone here, in my opinion, is really all that green. I include myself, in some areas of my life.

We produce waste. Quite a lot, actually. And recycling too. Not really that different than anyone else. Just a bit less of it, proportionately.

Composting, we are good at that! Growing food? Not all of us are really that prodcutive. We do build using natural local materials. But not everyone here always manages that, either.

So what are we doing right? Renewable energy – tick. We are really good at that! A hydro turbine shared by all, and individual small scale solar provide all our needs.
Spring water on tap – easy. It came with the land.
Using wood for fuel – yes – though some of us do still buy in wood, so it’s definitely not all land based, from our own site.

Downside – gas. We all use gas for cooking. It’s really hard to try to live an off grid yet mainstream life, and cook on a wood fired stove. Really, really hard. You need so much wood, and so much time. So I think without exception we all use gas.

And cars? There are lots of cars here. In fact, due to the fact that my husband and I both have jobs, and I am often a taxi for the teenagers, we have not one, but two cars! I can’t believe it myself, sometimes. We still do less than the average journeys per household in the UK, even though we have 2 vehicles.
My job uses willow from my land to teach people basketry & sculpture, so it is totally land based. But I still use a car to get to my jobs. Hard to take 50kg of willow on a train!
One the plus side – we are always mindful of doing as much as we can without excessive car use. But the cars still are an intrinsic part of our lifestyle. After all, we live in a rural area. It’s hard to get around without one. Isn’t it?

But – and its a big BUT – when our Ecological Footprint is calculated, we do still come in within a One Planet Footprint. This means we live within the the carrying capacity of the planet*. The average person in Wales uses around 2.9 planets worth of resources. So that means we would need 2.9 planets if everyone consumed as much as the average person in Wales. Sustainable? No.

(*However even a household living within ‘one planet’ can ultimately have a detrimental effect on the environment…).

We feel a bit better when we hear the average American uses 5 planets worth of resources. And heaven only knows what some of the climate deniers use! They probably intentionally try to use 20 planets of resources, just because they can!

You can find out more about Ecological Footprints here, including how to measure yours.

Even so, I know I am not doing enough. What can I do to make my supposedly Low Impact One Planet life more so? In reality we are far from self-sufficient.

And what can you do to change your level of impact on this planet?

My first suggestion is that we all use less plastic. I do try to avoid it, but the damn stuff comes with everything. There is a shop 14 miles away (yes, I would need to use a car as there are no buses!) which weighs everything into your own bags. That’s a start.
We could only drink almond milk, not cows. No plastic bottles then, as almond milk is easy to make just from a small handful of almonds. The British cup-of-tea won’t seem the same! But is it a sacrifice worth making? Do the bags of waste we put out make any impact?

Let’s look at that question. To be fair, for 5 people, we only create 1 small bag of waste every 2 weeks. But that is still 24 bags of waste per year. If you multiply this by the number of households at Lammas (10) that’s 240 bags per year. Think of that in a big pile. Yuck! And others may well produce more waste than we do.

And single use plastic bottles. How many do you use? I have been battling with my kids about buying any drinks in plastic bottles. I have threatened to make them keep the bottles they buy in their rooms so they can see how many they produce, and so they can take responsibility. It has worked, actually. Very rarely do any single use plastics turn up around here now. Because recycling is a lie. So refusing is the only option.

But how many parents do this? How many actually go and blindly buy loads of plastic bottles – with water, soda or juice in them? Every week? Every day? Think of that in a pile! What if you had to keep all your waste? What would you do with it all?

There are beaches in the South Atlantic with 300 pieces of plastic per metre. 30 years ago they were pristine (Source: text and photo; http://en.mercopress.com/2018/10/15/east-falkland-among-most-plastic-contaminated-shores-in-south-atlantic-islands) 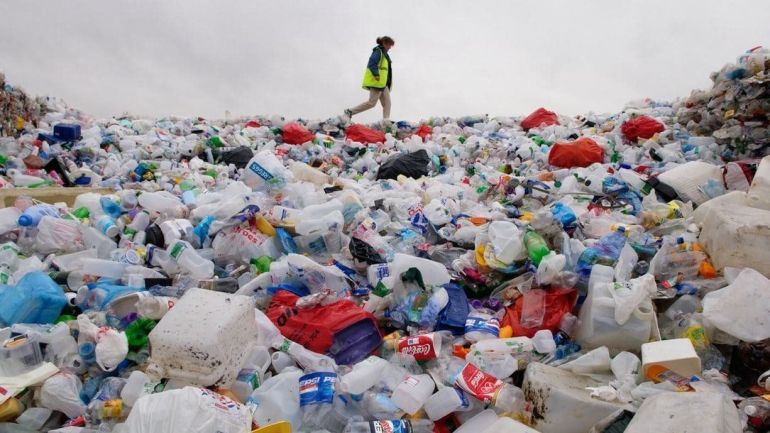 A trick of the ocean currents leaves all that waste there. But an uninhabited, remote  island doesn’t produce any plastic, does it? If the ocean currents decided to dump the plastic on our beautiful Pembrokeshire Beaches, would people wake up? Would you change your habits?

So, back to what you can do. Check each thing you buy. Be mindful! There are alternatives. You don’t have to buy products wrapped in plastic. You don’t have to buy polystyrene. You have a Choice, in every moment, ever day. Go to the local butcher, take your own wax paper. Go to shops that weigh produce into bags. Oh – like the old fashioned greengrocer perhaps? You can even take your own bags for weighing veg into a supermarket. Believe me, you won’t be the first one to do this. It’s really not THAT weird.

But, though I am actually an optimist, it’s all gone too far now, I believe. I have been doing ‘my thing’, being part of ‘the change’, since I was 20 years old, in 1989. Thirty years later, and the average person seems to have not changed a jot. In fact consumption seems more frantic than ever. The economy is still the drive. The news still focusses upon celebrity, crime, and nowadays, Brexit. Not the environment. Not the legacy we will leave our children. It’s all business as usual.

So what will you do with your life? What do you wish to leave your children? Polar bears are starving. The rainforest is getting felled as we speak. Yes we are so complacent, we just watch it happen. In disbelief. In denial. In a fog.

And yes – I admit – I too am watching. I confess I hardly know what to do. That’s why I am writing this. If even one person finds this provocative yet somehow galvanising, I have succeeded in doing something more than just living in an Ecovillage.

But that’s still not enough.

We all need to change our habits. Now.
Waiting for the government is not an excuse. We can all do something. Now.

So yes, I have made changes, in comparison to the average citizen. I want my children’s children to see the beauty and diversity of this world. Not a rubbish tip.

So why not look closely at your options? Small steady steps is better that no steps at all. And according to the United Nations – we only have 12 years to change the direction of travel (12 years to stop climate change). So there is no time to lose.

And at the end of this rant of mine – do you still think there is no point?

“How many of us would choose to buckle our grandchildren to an airplane seat if we knew there was as much as a 1 in 20 chance of the plane crashing? With climate change that can pose existential threats, we have already put them in that plane.”

Find out more about that quote here: